Today Dávid Turczi is our guest, I asked him about real time coop games, Rush M.D., and Rome and Roll. [Clicca qui per la versione in italiano]

When I read about Rush M.D. I reached Dávid and asked him about a few stuff. He was kind enough to answer to a few questions, even if he was headed to GenCon and I am very grateful for that.

Hi Dávid, welcome to Geek.pizza, can you introduce yourself in two lines? Who are you?

I am a game designer/developer, mostly known for my work on Anachrony, and for the many solo modes that I got asked to do in the years since.

I was very intrigued by Kitchen Rush but I never had the chance to play it, now you face a real time challenge again with Artipia Games and Rush M.D. What is the most intriguing thing about this real time, for you and what are the differences between Kitchen and MD?
I am inherently uninterested in fully open co-ops. And while real time has been used as a tool to make quarterbacking less prevalent, other than Vlaada Chvatil’s classic Space Alert, it has almost never been combined with a “heavyweight”, serious coop game. Plus I was fascinated with the concept of a worker placement game where the workers track their own cool down.
The biggest difference between Kitchen and MD? Probably the fact that the patients in MD are shared as opposed to private like the plates in Kitchen. That makes cooperation and coordination more obvious, even without resorting to “manager roles” – a strategy many people apply to beating Kitchen.
Someone once told me “This can’t work. If you love real time you don’t want resources to manage, if you want resources to manage you want to take your time to do it”. I guess you don’t agree (I don’t entirely).
I almost agree. The things that are incompatible are multi-step, enforced rules and real-time. Just taking a resource by itself, especially in “set collection style”, is easy. What can’t be done in a real-time game is to have an action that does many things, has conditions, etc – things you have to enforce and check in the middle of madness.
My wife says one thing you can’t avoid in cooperative real time games is that meek people just don’t play, they execute orders the other players give. Do you feel there is a way out of this issue?
I think it is even worse in non real-time co-ops. Here the alpha might bark some orders, but they still can’t do everything themselves. You still have to deal with the execution, and the partially dexterity elements. If you are too meek to interject, you’ll miss out on some of the coordination, but there is more to the game.

I read about Rome and Roll and once again you are mixing genres. I must say I love the idea. Roll, draft, draw Tetris-like buildings… I know
it’s crazy but the words “Terra Mystica” (adjacent buildings) and “Second Chance” (drawing Tetris-like shapes) came to my mind in a single wave.

Was this game built in a day? (Sorry, I couldn’t resist)
Funny you say that. Yes it was. My codesigner Nick Shaw visited me for 2 days, the core structure of the game (drafting, blueprint tableau, conquering, Tetris buildings, asymmetric player boards) were all in place by the end of the first day.
When will it land on Kickstarter? Any hope for an Italian release?
It’ll land on KS in September. I am not privy to deals with partners, so I have no idea what foreign editions will exist, if any.
Let’s go beyond Rome. What do you have in store for us? Can you give us spoilers about your next projects?
My next game after RnR will be an expansion for Dice Settlers to be released at Essen, followed by a November KS for Venice from Braincrack Games. It’s an interactive engine builder euro, with a heavy pick up and deliver element.
Last question, mandatory on Geek.pizza! Celebration time, the Kickstarter campaign is over and you have a pizza… what kind of pizza is that?
I’ll be the deviant here: I don’t eat pizza!

What did you say? You are breaking up… I’m sorry, I couldn’t get what you sa… click. 😀

If you want to know more about Rush M.D. click here, the Kickstarter campaign is almost over. They unlocked a bunch of stretch goals and they are about to unlock the 3D MRI machine.
Dávid, don’t worry, we love you even if you don’t eat pizza! 😉 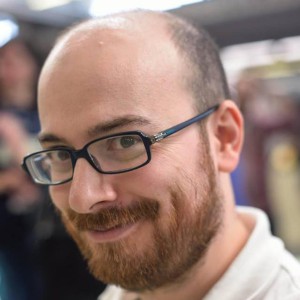